Stevenage Arts Society is celebrating over 40 years with its latest Winter Art and Pottery Exhibition at Springfield House in Old Stevenage.  The Chairman of the society and other members welcomed local MP Stephen McPartland, and showed him around the exhibits which are all work of the members of the society.

Stephen said "I was very impressed with the high standard of the work on display and proud of the artistic talents we have here in Stevenage."

He added, "I very much look forward to coming back and having a go at the pottery - I understand it can be quite messy, which sounds like great fun".

Stevenage Arts Society has permanent studios for both painting and pottery, as well Denington Galleries which allow them to mount exhibitions both of members' works and open exhibitions.

Local MP, Stephen McPartland, was in Datchworth recently visiting the primary school during which he joined the staff and pupils in their school assembly and quiz.

Stephen also took time out to look at some of the many artefacts in the Datchworth museum as well as signing the visitors' book.

Stephen McPartland MP and Asthma UK have joined together to campaign on inhalers for emergencies in schools across the UK. Under current legislation, bronchodilators (blue ‘reliever’ inhalers) are prescription-only medicines, which means that the law prevents schools from having a spare inhaler kit available for emergencies, something Stephen is keen to change.  He gained support across all parties when he launched the campaign in Parliament.

Stephen said, "Asthma is a big killer with three people dying in the UK every single day.  It is important this disease is taken seriously and children in schools have access to an inhaler in emergency situations.  At the moment, the law prevents children from carrying their inhalers in schools and they have to be locked away in a medicine cupboard.  This is ridiculous and it is time the law was changed so these inhalers can be kept in first aid kits in schools.  This simple change in the law could save lives."

Stephen McPartland, MP for Stevenage, is the chairman of the All Party Parliamentary Group (APPG) on Asthma, a group of MPs and Peers who have a special interest in asthma issues.

Stephen McPartland MP visited W J Rowe, a family-run chip shop in Bedwell Crescent, Stevenage, to congratulate them on being short-listed for a regional award.

Stephen said, “The chips tasted fantastic and I was delighted to congratulate William Rowe and his team for making it to the regional finals. I know they have done a great job for the community over many years and I wish them every success.”

William said, “I was so pleased to receive the letter from our MP. I really didn’t expect it.”

The Giles Infant and Nursery School in Stevenage have established their first school council and welcomed Stephen McPartland Member of Parliament for Stevenage as a special guest at the school's assembly to present badges to the newly-appointed class representatives.

The members of the school council are responsible for making sure the views of their classmates are taken into consideration and in some cases may even take part in the interviewing of new staff. 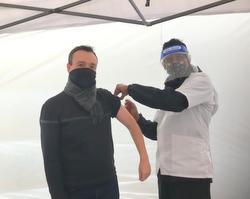