Stephen McPartland, Member of Parliament for Stevenage, was asked by local residents to come and see the poor condition of the surface of the road in Kessingland Avenue in the Fishers Green area of Stevenage.

Stephen said, "When I visited it was clear that the surface of the road is breaking down, with many pot holes, especially in the first 400 metres from the main road.  I have immediately taken up the state of this road with Hertfordshire Highways to try and identify a lasting solution."

Joe Beaumont, who lives in Stevenage, said, "Not only is it a huge danger to cars, it's also a disgrace that it's been allowed to get this bad. I'm right behind Stephen McPartland in chasing up the people responsible!"

Stephen McPartland, Member of Parliament for Stevenage, met with the Chief Fire Officer for Hertfordshire, Roy Wilsher, and members of Aston Parish Council to reassure residents about the measures in place for tackling fires in the village.  Commenting on the fire that destroyed much of two thatch cottages in Long Lane, the Chief Fire Officer noted that the impact of the fire was due to the wood and thatch nature of the buildings and that in more modern and conventional buildings three fire engines would have sufficient water to contain a fire.

Stephen said, “I have been raising the issue of fire safety in rural villages with Ministers and I was certainly reassured by this meeting. The professionalism of our firefighters in Hertfordshire is of the very highest standard and it is clear there priority is to keep us safe and I will make sure they have the resources they need to keep us safe.

"We all took on board the Chief Fire Officer’s comments and I would like to congratulate Aston Parish Council for agreeing to launch a fire safety campaign with the involvement and support of the fire service, and I hope to be at a number of events to raise awareness. Fire safety is important – it saves lives, with just a few easy actions: getting a smoke detector, shutting doors and having an escape plan."

Stephen McPartland, Member of Parliament for Stevenage, was invited by local firm JCA to open their new head office in Stevenage at a launch event attended by suppliers and other businesses from the area.

Stephen said “It was a privilege to be given the opportunity to open the new offices of JCA and formally welcome them to Stevenage. JCA are a great company that has expanded a lot over the last few years and I have enjoyed working closely with them as they have moved into our town and look forward to celebrating their continued success.

Stevenage is leading the way in helping our economy recover and I will continue to focus on delivering real jobs and growth locally, which build on the massive £250 million infrastructure investment in our local hospital, schools, jobs and housing that I have secured from the government."

Stephen McPartland, Member of Parliament for Stevenage, spoke at the official opening of the new Cardiology Centre, joining local TV personality Pam Rhodes as well as the Trust’s chief executive Nick Carver and many of the staff of the unit at the Lister hospital in Stevenage.

Stephen said "I was proud to be asked to speak to staff at opening of the new Cardiology Centre and I thanked them on behalf of the local community for their life saving work. The staff had already treated two heart attack patients who had been rushed in during the morning and this new unit is a wonderful addition to the £250 million of infrastructure investment I have secured from the government for our local hospital, schools, jobs and housing.”

Noise and night flights were amongst the major concerns highlighted by Stevenage MP Stephen McPartland in his submission to the recent consultation about the proposed expansion of Luton airport.  You can read the text of his submission below:

I am making this submission to the consultation process because I know many residents in my constituency, covering Stevenage and surrounding villages, are very concerned about the proposed expansion of Luton Airport.

Residents in Stevenage and the surrounding villages suffer from the noise generated by overflying aircraft, and this will only increase with the proposed expansion. The projections for noise seem to take into account some factors, such as the trend for aircraft to be quieter, but not others, such as the trend towards larger aircraft, which are noisier, and the increased frequency of flights, particularly in the summer months.

Of major concern, too, are night flights. It is important that any increase in capacity has to include noise reduction measures, so the quality of life locally is not affected, and residents have proper protections against disturbance from night flights.

The Pride Youth Project is now able to offer more young people in Stevenage a chance to take part in sport and art activities from their new base, the John Pryor Centre, Nokeside thanks to £50,000 awarded from the Community Development Foundation.

Stephen McPartland, Member of Parliament for Stevenage, visited the project, and commented, "I am always proud to support young people in Stevenage and this is a great project. Hayley and Becky are inspirational leaders and the children I met were deeply committed to taking part and channelling their energies into sport and art."

This is a budget for families, jobs and pensioners with fairness at the heart of it.

I am proud we are lifting millions of people out of tax and local people will have more money in their pocket and we are introducing the biggest ever increase in the state pension to help the elderly members of our community.

Our help for businesses will mean more jobs and opportunities for young people and the massive investment in the pupil premium which helps the poorest pupils in school is a real boost for families struggling as we try to clear up the massive debts Labour left behind.

I am proud to support this budget which helps the poorest in our community and builds on the massive £250 million infrastructure investment in our local schools, hospital, jobs and housing, which I have secured from the government for our town.

It was an amazing experience to listen to Her Majesty Queen Elizabeth II replying to the addresses made by both Houses of Parliament today on the occasion of her Diamond Jubilee.

This is only the eighth time in history a monarch has come to Westminster Hall to receive an address.

I am proud to be the Member of Parliament for Stevenage and look forward to welcoming the Queen and Prince Phillip to Stevenage in June.

Stephen McPartland MP hosted a meeting recently in Parliament to get to the bottom of the “teething problems” which have been encountered by many patients at the Surgicentre in Stevenage.

Stephen said “I organised the meeting after it became clear that our constituents were encountering a variety of difficulties in accessing the services at the Surgicentre and numerous appointments were being cancelled at short notice. This is obviously not good enough and we demanded both Clinicentre (who manage the Surgicentre) and their owners Carillion present themselves at Parliament to identify a way forward to improve the experience of our constituents”.

“I am pleased it was a very productive meeting and a number of changes have been put in place, which will benefit our constituents. However, it became clear during the meeting that the shared pathway process, which was implemented by the previous Government, is deeply flawed and in urgent need of reform”. 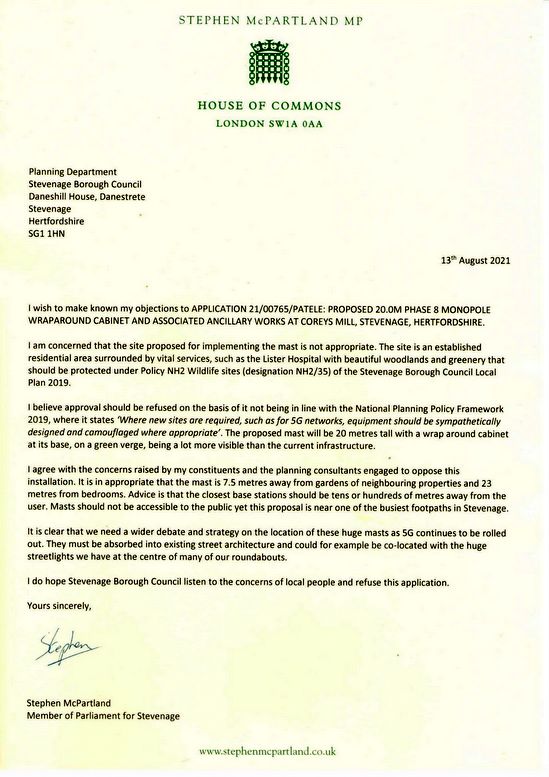