Stephen enjoyed the opportunity to meet all the students and hearing about the business skills they had developed through the programme. He delighted the winning students from ‘Brainwave’ with an invitation to have tea with him at the House of Commons.

Stephen commented, "I was very impressed with all the students and high quality companies they had developed. The enthusiasm, ideas and energy of the students was amazing and it was clear that some of our future local business leaders had taken part in the competition. It was a fantastic event and I look forward to welcoming the winners to Parliament."

Citizens Advice has a whole host of new and updated advice, information and helpful features for consumers on its website www.adviceguide.org.uk, as Stevenage MP Stephen McPartland found out first hand, including top tips, interactive letters to help consumers to make a complaint and details of what to do next to solve a range of consumer problems.

Stephen said, “Consumers need good, easy to understand advice which explains their rights and what they can do to solve their problem. The new online consumer advice from Citizens Advice offers just that and I am happy to support it.”

Stephen said "it was fantastic to see TItan perform and he was huge hit with children and adults. I was very proud of how many people turned up to support the new DaVinci Studio School, which will open in September.  The atmosphere was electric and everyone was excited. I am delighted we persuaded the government to allow Stevenage to be the pilot for the DaVinci Studio School at North Hertfordshire College".

Donna said: “The festival has proved a huge a success in so many ways; we managed to introduce many local families to the fun side of science and engineering and put the Da Vinci Studio School well and truly on the map. It was amazing to see people of all ages thoroughly enjoying themselves. This September the school opens to its first 100 students, we wanted to show the town what amazing fun you can have while learning.”

For more information about the school, which will be taking on Year 10 and Year 12 students, visit www.davinci-school.co.uk

Stephen McPartland, Member of Parliament for Stevenage, called for a debate in Parliament on further improvements to our local railway stations and welcomed the Government’s investment of £578,000 to improve the lifts at Stevenage station.

Stephen welcomed the Government’s direct investment in Stevenage station and said, “Most important, Access for All funding is allowing conversion of the goods lift to a fully automated passenger lift. That is costing £578,000, and disabled passengers will be able to use the lift, instead of waiting for a member of staff to unlock the goods lift, which is totally inappropriate. I welcome the additional funding, and that work is due to be completed in March 2014”.

Stephen raised a series of other points including a request that any new rail franchises include an obligation for passenger satisfaction to be introduced, which the Minister agreed was a good idea and he would consider.

Stephen McPartland, Member of Parliament for Stevenage was quick to congratulate Stevenage based Astrium on being awarded the contract by the European Space Agency to build the next generation of the Solar Orbiter.

Stephen, who is Vice-Chairman of the Parliamentary Space Committee, said "I am delighted that Astrium have secured this massive new contract, which really does put Stevenage at the heart of the Space manufacturing industry in the UK. I am proud Stevenage is leading the way during these difficult economic times and this helps build on the massive £250million infrastructure investment I have secured from the government in our local hospital, schools, housing and jobs."

The solar orbitor will investigate how the Sun creates and controls the heliosphere, the extended atmosphere of the Sun, and is due to be launched in 2017.

Stephen McPartland, MP for Stevenage, has called on all PCTs to immediately fund the recommended treatment options for Alzheimer’s disease patients amid growing evidence that a ‘postcode lottery’ for patients still exists and some are being denied treatment.

Stephen said, “It is crucial that local health trusts fulfil their obligations and make available the NICE recommended treatment options for Alzheimer’s disease. It is unacceptable that patients are still facing a ‘postcode lottery’ around treatment for this devastating disease.”

Stephen added, “It is 12 months since the recommendations on Alzheimer’s disease were published and 9 months since PCTs had an obligation to make these treatment options available. It is simply outrageous and unacceptable that, a year down the line, NHS patients are still being denied the necessary treatments.”

Stephen has raised the issue on behalf of patients who are still unable to receive the drugs that the National Institute for Health and Clinical Excellence (NICE) recommended in March 2011. He has repeatedly raised the issue of dementia and Alzheimer’s disease treatments in the House of Commons championing the roll out of the NICE recommendations for Alzheimer’s disease, which extended treatment options for clinicians by recommending drug treatment options at the mild, moderate and severe stages of the disease. This outcome was widely praised by clinicians and patients throughout the UK.

Stevenage-based The Furniture Ombudsman (TFO) is proud to have received the support of its local Member of Parliament, Stephen McPartland, MP for Stevenage, in its bid to establish a Consumer Code under the Office of Fair Trading (OFT)’s Consumer Code Approval Scheme (CCAS).

Stephen, who is also the Chair of the All Party Parliamentary Furniture Group, said, “The Furniture Ombudsman does a great job to inspire consumer confidence in the furniture industry. Additional recognition from the Office of Fair Trading through their CCAS would allow them to continue with the good work that they are already doing, which is clearly adding a layer of protection for consumers in an industry which is ripe for self-regulation.”

Stephen McPartland, Member of Parliament for Stevenage, commented today on the report from the Care Quality Commission on the Surgicentre at the Lister Hospital in Stevenage. These are the results of our most recent checks showing whether this care service is meeting each of the standards that the government says you have the right to expect.

Stephen said, “Sadly, I am not surprised by the findings of the Care Quality Commission into the ClinicentreCarillion owned Surgicentre. It is public knowledge that I organised a meeting of Members of Parliament and summoned ClinicentreCarillion to Parliament to explain the variety of difficulties our constituents are encountering in accessing their services. It has become clear that the shared pathway process, which was implemented by the previous Government, is deeply flawed and in urgent need of reform. I welcome the Care Quality Commision’s findings and will continue to work with them and the local Primary Care Trust to hold ClinicentreCarillion to account and reform this service”. 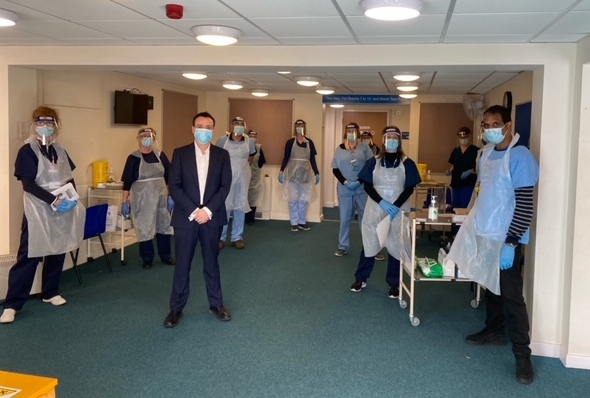