Stephen commented, “I am delighted the Olympic Torch has started the tour in the UK and look forward to welcoming it to Stevenage on Sunday 8th July.

It was a real privilege to be given the opportunity to hold a Torch and I want to wish our local torchbearers the best of luck, as I know they will make us all proud.”

Stevenage MP Stephen McPartland recently launched the UK leg of the GALILEO Master competition in Parliament and once again declared Stevenage as the capital of the UK space industry.

Stephen launched the campaign as vice-chair of the Parliamentary Space Committee and was joined by Ed Vaisey MP, Minister for Culture, Communications and Creative Industries as well as leaders from industry and academia involved in the UK Space Industry.

Stephen said, “The UK space sector is growing at 10% a year, making it one of Britain's most successful high value and innovative sectors. Stevenage is leading the way in the UK space industry and is home of Astrium which recently won the £244 million contract from the European Space Agency for the next generation Solar Orbiter.  Stevenage has an array of other companies involved in this high technology such as Tessella, who second scientists all over the world.  I am proud to launch the UK leg of the satellite navigation competition as it will encourage innovation and create more jobs, many of which will be in Stevenage – the capital of the UK Space Industry.”

The GALILEO Master is the overall winner of the Europe-wide satellite navigation competition which is open to anyone with an idea that utilises satellite navigation, positioning or timing technology.  The aim of the competition is to encourage innovation and the application of new ideas.  Prizes include thousands of pounds of cash, business support and introductions to wider industry and funding opportunities.

MPs and celebrities are backing the need for research trials on GM Crops.  Author and comedian Stephen Fry is amongst around 4,000 people who have signed an online petition by the charity "Sense About Science" which is not campaigning for or against GM Crops but to allow the trials rather than have the crops destroyed by protestors.

Stephen McPartland, MP for Stevenage, says he hopes a planned public debate will put an end to the row, "There is a huge worldwide shortage of food and there does need to be a debate. These scientists are prepared to share the data, so that it is publicly available. If their work is damaged it will fall into the hands of the large commercial companies, who won't end up sharing it because of commercial intelligence."

A blind football tournament hosted by Stevenage Football Club at the club’s Academy brought together a range of teams fielded by local businesses as well as the football club and Supporters Association to raise awareness of the challenges faced by blind people. The event also raised over £7,500 for the community scheme run by the club, with contributions from local firms matched pound for pound by Barclays Bank.

Stephen McPartland, MP for Stevenage, joined the teams and other spectators, and presented the winning team from Wagstaffs with their award after a close final against the Supporters Association team.

Stephen enjoyed the opportunity to meet all the students and hearing about the business skills they had developed through the programme. He delighted the winning students from ‘Brainwave’ with an invitation to have tea with him at the House of Commons.

Stephen commented, "I was very impressed with all the students and high quality companies they had developed. The enthusiasm, ideas and energy of the students was amazing and it was clear that some of our future local business leaders had taken part in the competition. It was a fantastic event and I look forward to welcoming the winners to Parliament."

Citizens Advice has a whole host of new and updated advice, information and helpful features for consumers on its website www.adviceguide.org.uk, as Stevenage MP Stephen McPartland found out first hand, including top tips, interactive letters to help consumers to make a complaint and details of what to do next to solve a range of consumer problems.

Stephen said, “Consumers need good, easy to understand advice which explains their rights and what they can do to solve their problem. The new online consumer advice from Citizens Advice offers just that and I am happy to support it.”

Stephen said "it was fantastic to see TItan perform and he was huge hit with children and adults. I was very proud of how many people turned up to support the new DaVinci Studio School, which will open in September.  The atmosphere was electric and everyone was excited. I am delighted we persuaded the government to allow Stevenage to be the pilot for the DaVinci Studio School at North Hertfordshire College".

Donna said: “The festival has proved a huge a success in so many ways; we managed to introduce many local families to the fun side of science and engineering and put the Da Vinci Studio School well and truly on the map. It was amazing to see people of all ages thoroughly enjoying themselves. This September the school opens to its first 100 students, we wanted to show the town what amazing fun you can have while learning.”

For more information about the school, which will be taking on Year 10 and Year 12 students, visit www.davinci-school.co.uk

Stephen McPartland, Member of Parliament for Stevenage, called for a debate in Parliament on further improvements to our local railway stations and welcomed the Government’s investment of £578,000 to improve the lifts at Stevenage station.

Stephen welcomed the Government’s direct investment in Stevenage station and said, “Most important, Access for All funding is allowing conversion of the goods lift to a fully automated passenger lift. That is costing £578,000, and disabled passengers will be able to use the lift, instead of waiting for a member of staff to unlock the goods lift, which is totally inappropriate. I welcome the additional funding, and that work is due to be completed in March 2014”.

Stephen raised a series of other points including a request that any new rail franchises include an obligation for passenger satisfaction to be introduced, which the Minister agreed was a good idea and he would consider.

Stephen McPartland, Member of Parliament for Stevenage was quick to congratulate Stevenage based Astrium on being awarded the contract by the European Space Agency to build the next generation of the Solar Orbiter.

Stephen, who is Vice-Chairman of the Parliamentary Space Committee, said "I am delighted that Astrium have secured this massive new contract, which really does put Stevenage at the heart of the Space manufacturing industry in the UK. I am proud Stevenage is leading the way during these difficult economic times and this helps build on the massive £250million infrastructure investment I have secured from the government in our local hospital, schools, housing and jobs."

The solar orbitor will investigate how the Sun creates and controls the heliosphere, the extended atmosphere of the Sun, and is due to be launched in 2017. 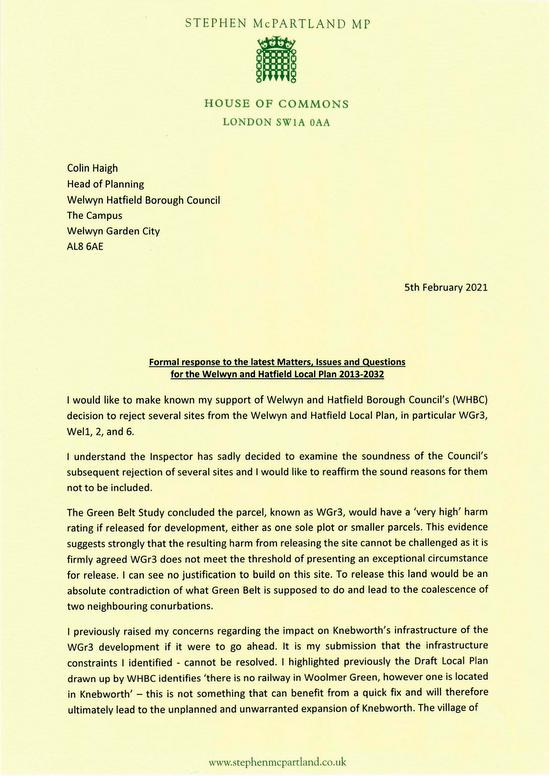